When you are trying to conceive, it is so very important to be informed about your body and informed about ovulation in general. Ovulation is by far the most important part of getting pregnant. There is so much to understand about ovulation, and it can be a little bit hard to get everything straight, as there is just simply a lot to take in. In this article, we will try to explain everything you need to know about ovulation and clear up the misconceptions that many people have. Claim Your 20 Free Ovulation Tests – Click Here

Ovulation is by far the most important part of getting pregnant. But what the heck does that mean?

Every month, a woman’s body will (most likely) release an egg from the fallopian tubes, where it will travel down to the uterus to wait to be fertilized by the sperm. If the egg implants in the uterine wall properly, a pregnancy will occur. However, if the egg is not fertilized, the uterine lining will begin to shed, and that is when menstruation will occur.

The most important part of getting pregnant is knowing when ovulation will occur. When you know when ovulation will occur, you can plan accordingly and know when to have sex for the maximum chance of getting pregnant. What most couples do not understand is that there are only a few short days (actually hours) each month where it is possible for a woman to get pregnant. That is during her fertile time.

What most couples do not understand is that there are only a few short days (actually hours) each month where it is possible for a woman to get pregnant!

What a lot of people do not know about conceiving is that after the egg is released and travels down the fallopian tubes, it will only live for around 24 to 48 hours before it begins to die. That means that fertilization will have to occur in that small short time frame in order for pregnancy to occur. 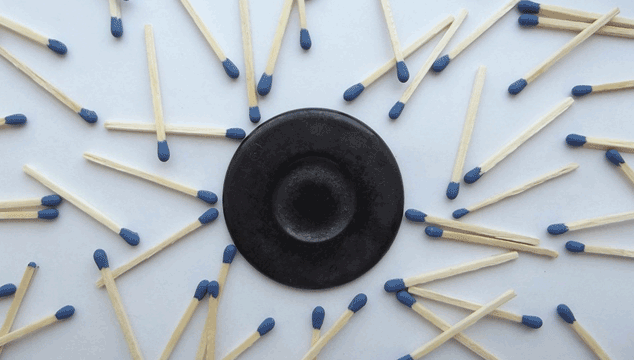 The good news is that sperm can live up to 72 hours in the uterus, so a great “trick of the trade” when it comes to conceiving is to have sex in the days leading up to ovulation so that the sperm can be “ready and waiting” for the egg to be released. This way, couples can maximize their chances of getting pregnant quickly and easily.

When Will I Ovulate?

As you can see, the timing of ovulation is super important when it comes to getting pregnant and it is super critical to know when ovulation is going to occur if you want to get pregnant easily. Luckily there is so much technology out there today when it comes to conception, and that means there are many tools out there to help women know when they are most fertile. Read on for some of the easiest ways to figure out when ovulation is going to occur.

Read on for some of the easiest ways to figure out when ovulation is going to occur.

One of the most popular ways to know when you are ovulating is to use a simple ovulation predictor kit. These kits are available online or at pretty much any drug store or big box store. Ovulation predictor kit tests work much like home pregnancy tests, using a woman’s urine to look for levels of LH (luteinizing hormone) in a woman’s body.

These kits use a test line and a control line to determine the level of LH. The control line will stay the same with each test. However, as a woman gets closer to ovulation day, the test line will get darker. Once the test line is the same color or darker as the control line, it will indicate that ovulation will occur, usually within 24 to 48 hours. These tests are inexpensive, easy to use and effective, making them a huge hit with women who are trying to conceive. 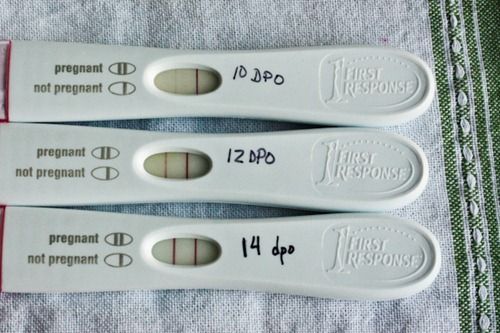 One of the most telling symptoms of ovulation is an increase or “spike” in basal body temperature. However, this is one of those signs that you will not notice unless you are already looking for it. That’s because the “spike” is a tiny spike in temperature that most people would not even pay attention to. So, how does it work?

Women who are curious about their ovulation schedule can purchase a special basal body thermometer. This kind of thermometer measures temperature down to a very precise degree. Then, every day, the woman will need to take her temperature using the thermometer before she even gets out of bed in the morning. This is because the basal temperature is the temperature of the body “at rest”.

This is actually a great way to predict ovulation, once you figure out how exactly to do it and once you see when your spike in temperature will be.

Each day, a woman will need to chart her daily temperature onto a chart or a piece of graph paper. Soon, she will notice a small “spike” in temperature. This spike indicates that the LH surge is getting ready to occur in the body and that ovulation is usually around 24-48 hours away. Once a woman gets the hang of charting and does it for a couple of months, she will be able to predict pretty accurately when she will ovulate. This is actually a great way to predict ovulation, once you figure out how exactly to do it and once you see when your spike in temperature will be.

As you might guess, this is cervical mucus that resembles egg whites. Clear, sticky, stretchy and slippery.

Another common symptom around the time of ovulation is sore breasts or breast tenderness. Due to increased levels of hormones in the body, the breasts, as well as the nipples, can be sore and tender to the touch. They may also feel extra “full” or heavy during this time. This is a common ovulation symptom but is also sometimes mistaken for an early pregnancy symptom, since sore breasts are usually one of the first symptoms of early pregnancy. 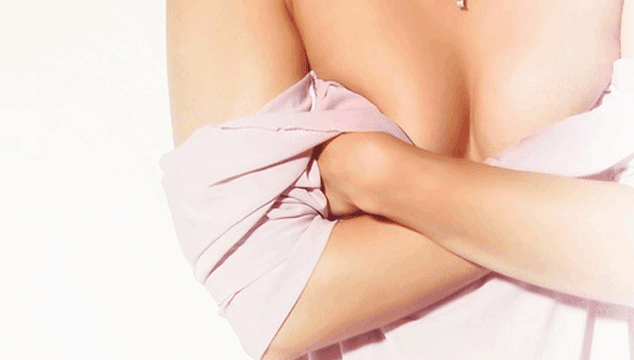 Have you ever had Mittelschmerz? It sounds like a made-up nonsense word, but chances are, if you have ever felt pain or cramping in the pelvic region around ovulation time, you have actually suffered from this sensation. Mittelschmerz is the German word for literally, “middle pain,” and it affects up to twenty percent of women around their ovulation time. Many women report feeling uncomfortable twinges of pain in their abdomens in the days leading up to or immediately following ovulation.

Have you ever had Mittelschmerz? It sounds like a made up nonsense word

The pain, which is usually mild cramping around the site of one of the ovaries, lasts from a few minutes to a few hours. The pain usually is on a different side each month, since the ovaries release eggs from a different side each time. This pain is usually quite bearable and is described more as a dull ache than an agonizing pain. It’s important to remember that if this ovulation pain is intense, or does not subside with the use of an over the counter pain reliever, women should probably see their doctor in order to rule out a more serious problem that could also be causing stomach pain.

Much like cramping and pelvic pain, many women also experience light spotting around the time of their ovulation. This isn’t a symptom that always occurs, only sometimes, due to varying hormone levels. The spotting can be light pink or brown in color, and usually doesn’t last more than a day or so. However, if spotting or bleeding persists, it is definitely a good idea to see a doctor to rule out a more serious health issue.

When a woman is nearing the time of ovulation, her cervix will feel low, open, wet and moist. It’s sort of a similar feeling to the feeling of your lips. However, once ovulation passed, a woman’s cervix feels higher, drier, closed and a little hard, kind of like the feeling you get when you touch your nose. It sounds a little bit complicated, and sometimes it is. That is why not many women check their cervical position to find out if ovulation is near.

Once ovulation passed, a woman’s cervix feels higher, drier, closed and a little hard, kind of like the feeling you get when you touch your nose. 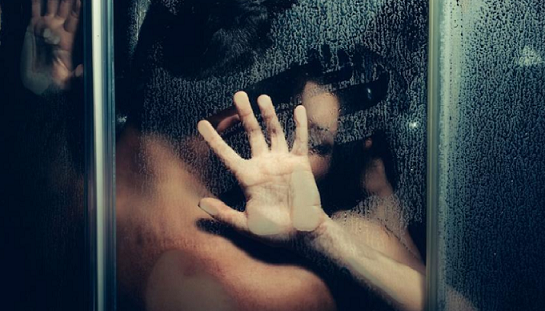 The increase of hormones that come along with ovulation can sometimes increase a woman’s sex drive as well. The increased levels of estrogen in the body during this time can be the reason for a woman to be “in the mood” more than usual. However, this one isn’t a “tell all” symptom. Many women still ovulate without feeling a higher sex drive, and also, many women who do have a higher sex drive during this time don’t automatically ovulate. This is just one of those “be on the lookout” for signs that can increase when ovulation gets near.

Guess it really is all about the hormones!

Another very common symptom of ovulation is bloating, or water retention. Much like right before their period, many women find that they are bloated and that their clothes don’t fit quite right just before ovulation. Of course, this, just like all of the other ovulation symptoms is blamed on hormones and the influx of hormones in the body just before ovulation, and the hormonal shift after ovulation as well. So, if you find your jeans not fitting properly, or you just feel a little bit “blah” for no particular reason, it could be that you are approaching your most fertile time.

So, if you find your jeans not fitting properly, or you just feel a little bit “blah” for no particular reason, it could be that you are approaching your most fertile time. 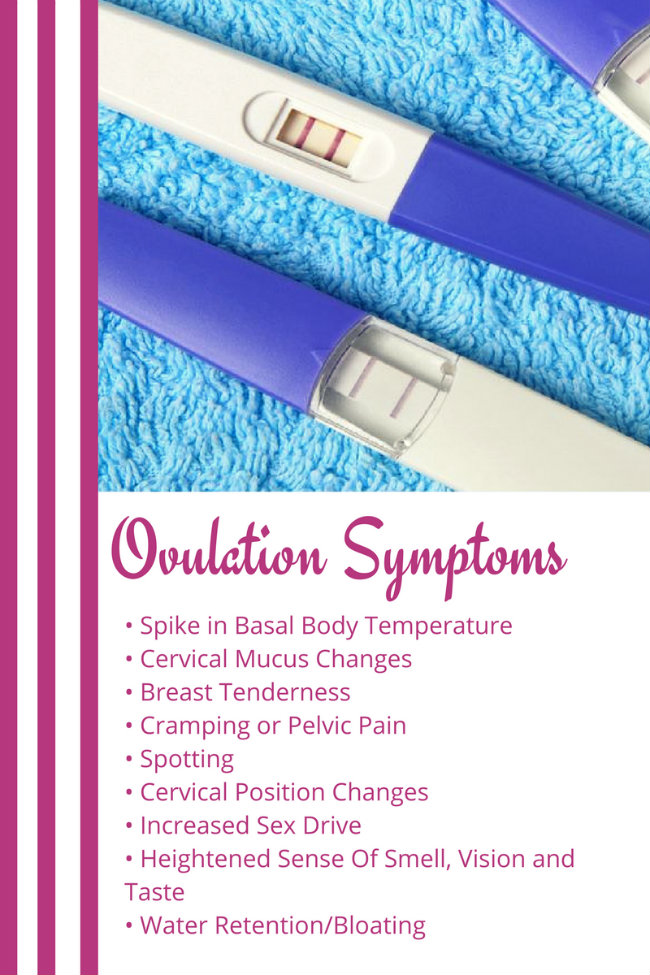 As you can see, there are many different symptoms of ovulation. Some women will experience all of these, but some women might experience only a few. Still, other women will not experience any of these symptoms. Some ovulation symptoms may not be something you would expect, as there are a few that are a little bit “out of the box.”