Cervical mucus is the fluid that is secreted from the woman’s cervix. During the ovulation time span this mucus will become thin and stretchy and have the color and consistency of an egg white.  Claim Your 20 Free Pregnancy Tests – Click Here

Some women have a hard time with the amount of cervical mucus they produce. There are ways to improve the amount and health of your cervical mucus. Here we will discuss both of these options. 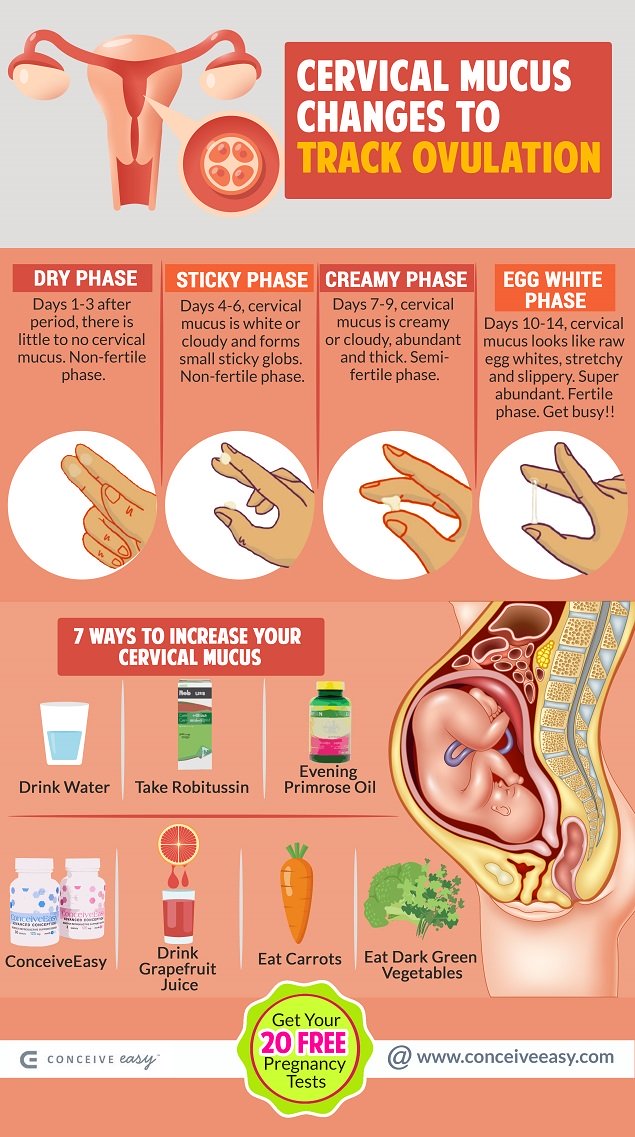 Nicotine can begin to decrease your body fluids, including cervical mucus. This needs to be cut completely, especially if you are trying to get pregnant.

Slow down on the caffeine

Ever noticed how you may have a soda and shortly after that you are thirsty and want another soda? The ingredients in soda and caffeine can cause dehydration, making you thirstier because your body is running low on fluids; this includes your cervical mucus.

The average person should drink sixty-four ounces of water per day. That is eight glasses of eight ounces of water. Water is good for the body anyway; when you are trying to conceive (and even after you have) water is that much more important. Your body needs replenishment in order to create the cervical mucus that is needed for fertilization.

This can be found in over the counter cough medications like Robitussin and is actually used by some women to increase cervical mucus. If you chose this route please use the plain kind (ask your pharmacist) and take two teaspoons two times a day.

Have a healthy weight

Being over or under weight can take a toll on the body in any aspect; but especially when you are trying to conceive. Keep a healthy weight so your body’s chemistry and hormone levels stay balanced. A balanced body is a happy body!

Cut the outside influences

Do you use the scented feminine care products? Or the scented toilet paper? Take frequent bubble baths? These products all contain chemicals that may interfere with your body’s natural chemistry and can cause outside influence on your cervical mucus. Cut these big chemical products to improve your chances of more cervical mucus.

This can actually be used to both improve and increase your cervical mucus but it is more known for improving the overall health of it, making it easier for the sperm to travel in it safely. This is a fatty acid that helps to improve the mucus and create more egg white type mucus.

This vitamin is used for almost everything nowadays; however, it is proven to be effective in creating more “water like” cervical mucus; which in turns makes more. However, it is in the “improve” category because if it is taken with grapeseed oil it is said to make the mucus healthier and the vitamin C more effective in the body.

If these options fail speak with your doctor about further options.