Whenever you and your partner have been trying to conceive over a year and have not been successful, that is the time to start seeing a doctor about the failure to conceive. And, if you are 35 or over, your doctor would help you if you have been attempting to conceive for 6 months without any success. If you are over 40, you would be having to work with your doctor right away. Find out why I feel an HSG helped me get pregnant.  Claim Your 20 Free Pregnancy Tests – Click Here

There are many factors that cause infertility and more often than not, hormonal imbalances are the biggest cause than structural problems with the reproductive system. However, sometimes when you are dealing with blocked fallopian tubes from scarring due to surgery, an infection or endometriosis- that is a serious structural issue that may never get solved. Therefore the only way to conceive in those situations is through in vitro fertilization (IVF). 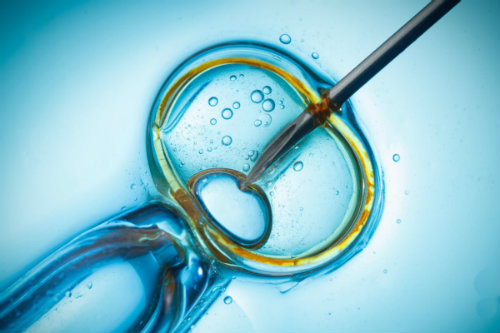 However, there are times when the structural problems with the reproductive system are so mild that conception could happen easier after a certain procedure is done. I am not talking about surgery to remove tissue due to endometriosis. What I am talking about is a simple procedure that fertility specialists do while assessing the female reproductive system before arranging the appropriate fertility plan for couples.

What has to be done in all cases is to determine whether the fallopian tubes are open or not. Otherwise, if the tubes are not open and they put the woman on fertility drugs anyway, then unless IVF was the treatment of choice- pregnancy could still simply not happen due to her having blocked fallopian tubes.

The test to determine how well the fallopian tubes are functioning and if they are open is called a hysterosalpingogram, or HSG.

How Is The HSG Performed?

The way the HSG works is that iodine dye is administered through the cervix and goes through the fallopian tubes and uterus, and the way the dye travels is watched through an X-ray. X-ray pictures are taken as well. 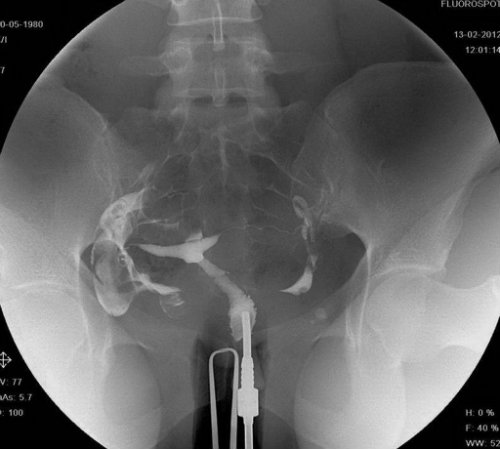 The purpose of this test is to determine whether or not the tubes are open, functional and it also indicates the shape of the uterus. It is a necessary procedure that has to be done before starting any kind of fertility treatment.

In fact, some specialists may even do the HSG even when IVF was the only option for a couple just to determine the shape and appearance of the uterus. Because in some cases, unless surgery can fix the uterine shape, a surrogate may be the only option.

However, even when the tubes are completely functional, the HSG procedure will open them up even more. And, that can actually be good news for so many women. In fact, many women have claimed to have conceived within 1 to 3 months after the HSG procedure was done. And, even your fertility specialist may tell you that there could be a higher chance of conception happening after the test as well.

Is Pregnancy Really Likely After The HSG Procedure?

The answer to this question is maybe. The HSG can be performed by using either a water-based contrast medium or an oil-based contrast medium. That is the dye that technicians use to see the state that your fallopian tubes and uterus are in. And occasionally a mixture of both types of dye is used.

Sometimes this solution can be used for tubal flushing, which is done for therapeutic reasons without needing to use the X-ray. Therefore, studies have been conducted on this matter and have found that pregnancy rates have increased after the oil-based contrast medium was used. Pregnancy rates did not increase after the water-based contrast medium dye was used, or the mix of both was used, or after not having any kind of flushing as well.

Therefore, if you have the oil-based dye used for your HSG, then you do have a higher chance of conceiving. In fact, if you are planning to have a flushing done, or need to have the HSG done for diagnostic purposes – you should ask your doctor what kind of dye they plan to use. You may want to request that you have the oil-based dye used over the water-based one or using a mix of both. 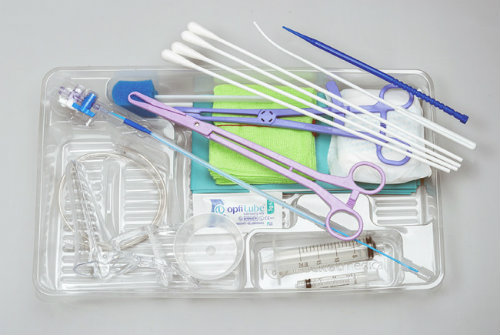 How Much Did The Pregnancy Rates Increase?

When it comes to couples who have no fertility issues and no need for any kind of fertility intervention, the odds of conceiving are 17% per month. The reason that those numbers are low is that many times the attempt at conception happens on days that are not part of the fertile time during the cycle.

However, when tubal flushing was done with the oil-based dye, the rates of pregnancy went up from 29 to 55 percent. The increase of those odds is incredibly significant.

This is because the tubes are wide open after the flushing is done as the oil has a greater effect than the water or the mix. And even if intercourse happened well before the fertile time of the cycle, it is possible that the swimmers hung around the wider tubes for a long time since they can survive in the tract for up to a week.

The effects seem to be the most drastic for the first 3 months after the procedure. After the 3 months are passed, the tubes may not be as open as before.

How Does The HSG Increase Your Odds Of Pregnancy?

There are a few theories, and remember that the water-based or mixed dyes don’t seem to have an effect on increasing the odds of pregnancy.

Sometimes women have minor blocks and adhesions in their fallopian tubes for various reasons. Therefore, the oil-based dye would clear those minor blocks out and open the tubes up more.

Since oil is denser than water, it makes sense as to why that would work. That is one theory as to how pregnancy has been known to be achieved after the HSG. However, for serious blocks that cannot be removed, it would have no effect.

Secondly, it is believed that the dye can strengthen the endometrium, therefore, it helps implantation happen more effectively if a pregnancy was achieved. And sometimes the catheter being placed through the cervix alone would help as well but if that were true, then pregnancy rates would be increasing even after water-based or mix dyes were used in the HSG procedure.

Some theories also suggest that the dye stimulates the ovaries, and helps trigger ovulation as a result. However, there is no actual proof that these are the reasons. It is believed that this is how the oil-based dyes affect the reproductive system.

And, pregnancies have been successfully achieved after flushing with the oil dye for those who have unexplained infertility, early stages of endometriosis, and fertility problems due to immunological reasons.

I can also tell you from personal experience I believed the HSG helped me conceive within 3 months as well. In my case, I was going through fertility treatments because my husband has a low sperm count and I have PCOS, and we were planning to do intrauterine insemination (IUI).

I had to have the HSG done to make sure that my tubes were clear and had the procedure done. My left tube was found not to be wide open as my right and it was believed that since I did deal with pain from this, that the left tube spasmed. But since the right tube was fine, they put me on Clomid and did the IUI procedure. 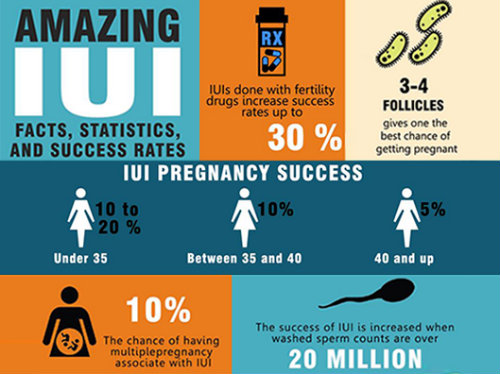 On the second attempt, I conceived my daughter and had a great pregnancy. However, I can’t say for sure if the HSG had helped move things along for me as I did not know what kind of dye was used (and I did not even care at the time, let alone to think to ask).

But what I found interesting was that they said my left tube was not wide open at all, and when I had my first ultrasound with my daughter when I was 10 weeks pregnant with her, the technician said the corpus luteum was on the left side. And, I had a good follicle growing in that ovary and had another one growing in my right ovary.

But the one on the right had released and the one on my left was very close to releasing at the time. That is when they had to do the procedure and my husband had to be called from work to give the sample to do it. And, it worked!

So, is it possible that I had a minor blockage in my left fallopian tube for unknown reasons and the HSG cleared it out since the egg from the left ovary was the one that was fertilized and had successfully implanted? That is difficult to say. Maybe it did and maybe it didn’t.

And now, it does make me wonder. Therefore, if you are having the HSG done for flushing or for having a procedure done like IUI or if you are being put on fertility drugs– but plan to conceive the traditional way, ask your doctor to have the oil-based dye used for the procedure. 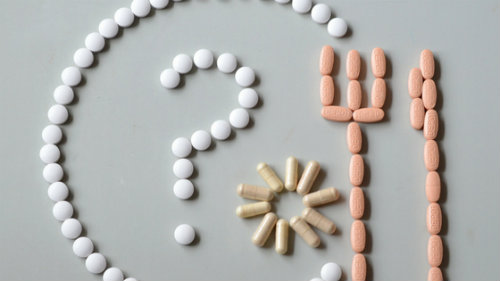 How To Maximize Your Chances Of Conceiving After The HSG Flushing

Chart your cycles. If you are not already charting your cycles by using a basal body thermometer, checking your cervical mucus and even using ovulation prediction kits, then this is the time to start. In fact, if you plan to have the HSG done in a few months, the best thing to do is to chart by using the thermometer until you see a pattern of when in your cycle you ovulate. Then you can use the cervical mucus method, as well as relying on ovulation kits once you are ready to start.

Stick to the fertility-friendly diet. This is incredibly important to do. Stick to healthy foods that have loads of vitamins and minerals, and Omega 3 fatty acids that will increase your odds of conceiving. Put a strong limit on junk food, and avoid alcohol, smoking, and drugs as well. It is a good idea to work with a nutritionist that specializes in fertility-friendly diets as well or is knowledgeable so you can eat the right amount of food for your own needs.

Manage stress. Life is full of stress, and when you are going through fertility treatments of any kind, the stress levels become even higher. This is why it is incredibly important to find ways to manage your stress so it does not harm your fertility and overall health.

Take a meditation class, or a yoga class, and definitely take time to unwind after a stressful day by reading a good book, or watching a comedy, and listening to relaxing music. It can make a world of a difference. Or, be sure to do anything that brings you joy as long as it is a healthy outlet. That means drinking a glass of wine to unwind is out of the question!

Therefore, if you are able to successfully manage your stress levels, and you are eating foods that are fertility-friendly, and you know exactly when you are ovulating (more or less), then your odds of conceiving after having the HSG with the oil-based dye is a lot higher. Best of luck to you!